So here we are in November again. On the 15th of the month it will be Dana's birthday. She is alive in our hearts for twenty five years. Our lives go on surrounded by her presence, but as time passes her identity becomes a blurred memory around us and the gap between reality and memory lessens. Once a year we attempt to bridge the gap between this vast emptiness, between the life that was stolen away from Dana, and our lives now. And the path is clear, with dear people waiting for us along the way, joining and helping us, and thus, this year as well, it is happening again: The evening of Art will take place on November 23, 2013 in Amiad Center in Yafo. The topic of the evening is Identity, and it will bridge between cultures, displaying works by Israeli and Angolan artists.

Those who knew Dana knew that she was intensely interested in Africa's culture, art and music. She had a dream of doing something significant with her life that was connected with Africa. Her choice of studies was also part of this. During her travels she shared with us moments of inspiration that she had, and that gave us a clear direction of how to commemorate her. It was clear to us that we would attempt to create for Dana a connection with her unfulfilled dream, and from that point, we began.

"We consistently change our identity from the moment we are born"

The connection with Angolan artists was initiated in January when we contacted an organization in Angola focused on strengthening Angolan artists. We were not alone, dear friends helped us make this happen. And of course so did Dana's friends. Why Identity? Because this is the age that Dana would have searched within herself to refine her identity. We continuously grow and change our identity from the moment we are born.

"Our identity is fluid, influenced by our environment and crystalized by relationships and mutual experiences we have"

Our identity is fluid, influenced by our environment and crystalized by relationships and mutual experiences we have. Dana's life was stemmed three years ago. We ask ourselves everyday: Where would you have been today? What would you do? What would you excel in? On the other hand, the hard, realistic question is: Is identity relevant only while we are alive?

Our evening Art event will take place on Saturday November 23, 2013 from 16:00 until late. The group of artists from Angola will arrive on November 16th, and we are expecting to have a week of combined creativity that we very much hope will create a platform for future collaboration. Throughout the week we will hold music salons, tours of art centers, and trips throughout Israel. We will have joint workshops, and in between also create an exhibit together. The works in the exhibit will center around the expansive theme of Identity.

Some of Dana's works will be on display (also works that have not been presented as of yet), as well as works from the Angolan artists, and of course works by 28 of Dana's friends and new friends that have become part of our group along the years. Some of the works were created in advance, and some will be created during the week in Israel. At 18:30 we will have a ceremony followed by music and more. The evening is open to the public, please feel free to invite friends. We are very excited. It is such a special event for us, and of course, for Dana. We would like to thank everyone who has been assisting us and helping this dream happen. We are looking forward to seeing you. 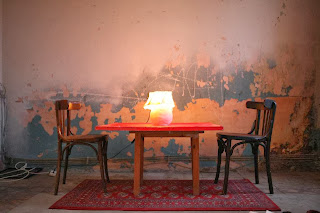 Posted by Trade Your Talent at 9:10 AM

"In Memory of Dana Maor"

Danalogue is an artistic event in memory of Dana Maor - on the occasion of Dana's birthday - Dana used to celebrate her birthdays by organizing parties, renewing places, creating connections and bringing friends closer. We decided to create a tradition for Dana's birthdays, setting ourselves a goal: Giving the floor and allow young artists the possibility for creative professional development. Enable creativity in a variety of environments without expenses. Recruit organizations for initiatives to expand the ripples of activity. And so, every year we will have an interactive event of art, creating connections between medias, artists, communities and initiatives, and will set the stage for display of the art, bringing people together for the young artists. Dana's pieces will also be displayed along with other works of different media- visual, video, exhibits, music and dance.